We’d like you to meet Jacques. He is only 14 years old, but don’t let his age fool you. He’s already an experienced activist for people and animals.

Within the last few years, Jacques has done more to change 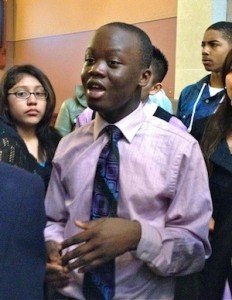 this world than most people do in a lifetime. Some guidance and support from HEART instructors was all he needed.

So what has he done? Jacques is known for his enthusiasm and his passion for justice. So it was no surprise when his classmates chose him to lead them in a project to promote human rights by taking a stand against homophobic bullying.

With the guidance of HEART instructors, Jacques led his class in organizing an anti-homophobia assembly and panel discussion. At the assembly, students shared powerful anti-homophobia videos and poetry they created, and led prominent members of the LGBT community in a discussion about ending homophobia.

Jacques and his fellow students made it clear that their community was one where everyone was welcomed and accepted. The event changed the lives of everyone involved.

A truly humane world is one where all living beings are treated with compassion. That’s why Jacques also played an important role in his class’ trip to Springfield where they lobbied for stricter animal protection laws.

Jacques was one of the many students who spoke with state legislators about banning puppy mills, creating programs to stop dog fighting, and preventing farmers from cutting off the tails of cows on factory farms without anesthesia.

Months after the trip, Bob Schwalb, the Chicago program director, was told that the legislators were still talking about the visit from Jacques and his classmates! Clearly, these conversations had an impact on them.

What if every classroom was full of young people who refuse to turn a blind eye to injustices committed against people or animals? When they see something that needs to be changed, they would roll up their sleeves and do something about it.

We believe this world is possible. Our program educates and inspires young people to be active and caring citizens just like Jacques. Our goal is to expand our program so that every young person has the knowledge and skills necessary to create a more humane world.