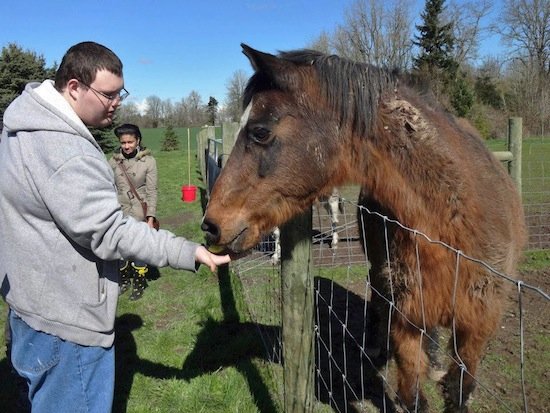 Tina Crow, co-founder of the sanctuary, warmly greeted them and provided stories for many of the animals who had thankfully been rescued from their previously heartbreaking lives.

– Daisy, a 6- year-old POA Quarter horse mare, and Nash, a 23-year-old Arabian gelding. The two came in together after being displaced as a result of a domestic violence situation.
– Buford, a goat who was abandoned by his people when they sold their house. The new homeowners unfortunately didn’t want him either.
– Hamilton, a shy sheep who was the sole survivor of his small flock after coyotes attacked.

Most of the Meek students had never been to a farm before or interacted with farmed animals and when they approached the animals for the first time, fear and unease were palpable. But fear quickly changed to curiosity and slowly the questions emerged. One of Dani’s favorite moments was witnessing several students who trailed behind the group grab handfuls of grass and feed them to Daisy who was eagerly waiting at the fence.

A blue sky was punctuated by beautiful, fluffy white clouds and a gentle breeze. The kids enjoyed lunch under a black walnut tree. They loved the organic peanut butter and local strawberry and blackberry jam sandwiches, apples and kettle chips. One of the students, Adam, remarked that this was the best field trip he had ever experienced. He was happy these animals could live free from harm at Green Acres and that he could be away from the hum of electricity and constant noise of the city.

Dani said about the trip, “I have no doubt that the hearts and minds of these 15 young people were opened in a way that may have never happened without this trip. We are so grateful to the American Society for the Prevention of Cruelty to Animals (ASPCA) whose generous grant made this trip possible.”

Tweet
Share
Pin it
Previous StorySave the Planet: Making Art Out of Trash Next StoryMe. You. Us