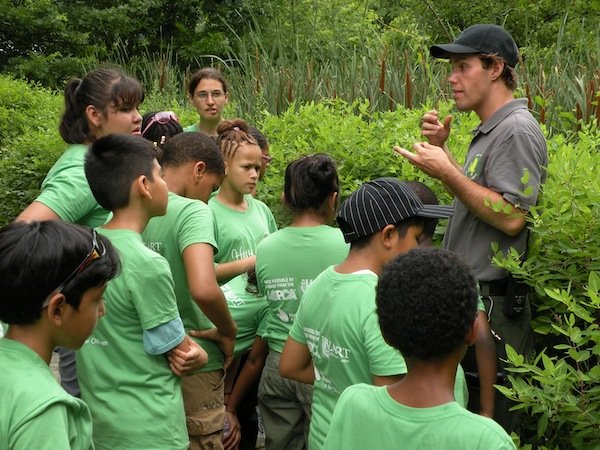 For their first field trip just three days into the 2013 Have a HEART summer camp, campers made their way over to the Van Cortlandt Park Nature Center to learn about the plants and animals that call the Bronx their home.

Under the guidance of two incredible park rangers, the campers walked through the wooded areas and wetlands and saw trees, insects, animals, and most importantly, talked about respecting the natural world. When the kids first arrived and Ranger Bill asked them what they thought were some key things to remember while they were on their nature walk, one camper answered that it was very important to “be humane” and to make sure they didn’t disturb any of the creatures who lived in the park. Needless to say, Ranger Bill was impressed, as were we, by the level of understanding these campers had achieved after just a few days of camp.

What did they spot along the way? A praying mantis egg case, a turtle, a variety of birds and butterflies, as well as plenty of different plant species. Ranger Bill also shared some of the most fascinating creatures he has seen including owls and other birds that migrate through New York City.

Check out some of the pictures from the day. We know the campers had a great deal of fun and learned a lot about their feathered and furry neighbors, as well as about how to respect the habitats of others.

Tweet
Share
Pin it
Previous StoryHEART’s “Have a HEART” Summer Camp is Back! Next StoryHEART Campers Visit Shelter Animals at Animal Haven