For eight weeks, starting on January 22nd, a group of compassionate middle school students from I.S. 230 in Jackson Heights, Queens met every Thursday afternoon to learn about different animal issues. But there was something a little different about this after school program. These students were not just learning about animal welfare issues; they were preparing to take part in an annual Humane Lobby day in New York State. Each year a group of passionate and dedicated animal lovers descend upon Albany, the state capital, to meet with their elected representatives and discuss laws that directly affect New York State’s animals.

The students not only learned about important animal issues like tail docking, declawing, horse slaughter and the animal cruelty statutes, they also learned the ins and outs of lobbying and how to engage their elected officials in a meaningful and effective way.

Each week the students would take notes, diligently writing down the best arguments to encourage each bill’s passage. After learning about each of the issues the students practiced their lobbying skills, watched how-to videos on the subject, and participated in a lobbying role-play, where they stated their arguments and fielded questions from instructors who were pretending to be legislators.

Finally after much preparation, the day came and on March 24th the students braved the cold and the early morning, arriving at their school at 5:45am in order to leave as a group and board a midtown Manhattan bus to the capital. After two and a half hours of driving the students arrived and joined up with 130 other animal lovers participating in Humane Lobby Day.

The attendees started their day by hearing from speakers from a variety of animal protection organizations, including the Humane Society of the United States and Farm Sanctuary. 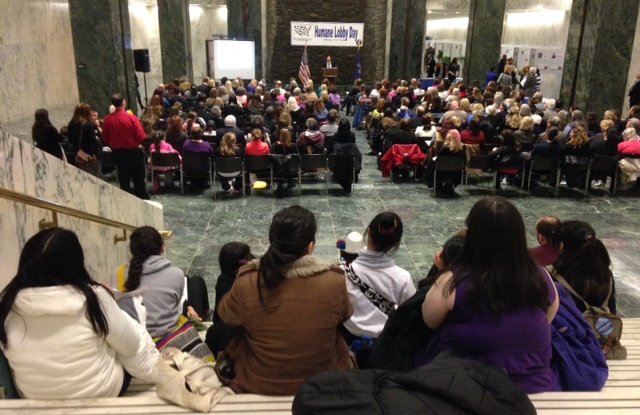 After the morning’s festivities the students were able to flex their brand new lobbying muscles. They met with their state Assembly Member and state Senator’s office. They were able to subdue their nerves and clearly and concisely present the issues surrounding each of the bills and asked for their representatives to support the bills. They were even able to get in a quick picture with their Assembly Member Michael DenDekker, who agreed to vote for all of the bills the students discussed.

After a very long day of speaking up for animals the students arrived back at school at 8:30pm still buzzing from the day. When asked about the trip the students had nothing but wonderful things to say.

One student said, “It was a win-win. We won because the trip was a lot of fun and the animals won because we got to be their voice and protect them.”

It really was a true win for animals as they now have an empowered, passionate and motivated group of young people on their side, willing to speak up for them and be their voice.