When I arrived at the Youth Farm in Prospect Lefferts Gardens, Brooklyn, about a dozen students along with some young adults were hard at work, tending to the acre plot of organic produce and flowers in front of the High School for Public Service. A small group of eight students and the teacher of their summer program were just circling up for their morning introductions and stretches—perfect timing for me as I just biked five miles across Brooklyn on a warm morning.

The Youth Farm is an education and production farm that teaches youth and community members about growing organic food while providing training and leadership development opportunities for students. Last week was my third time visiting the school and farm, this time to lead a workshop for high schoolers in their summer program on migrant farm workers. In addition to developing their gardening and farming skills, students had already begun learning about nutrition and food justice in their program. I came in to help students explore some of the human rights issues involved in our food system.

We began by talking about what we each ate for breakfast, identifying some of the ingredients that are in those foods, and asking if we knew anything about where those ingredients came from (i.e. the wheat in a student’s toast) or the conditions of the farm workers who harvested them. Across the board, very few of us in the room knew if the workers whose labor enabled us to be eating were paid or treated fairly at their jobs.

In order to get a sense of some of the common working conditions farm workers in the US endure, we split into small groups to read and discuss case studies of particular types of food—tomatoes, grapes, oranges, and chicken. The case studies, which included quotes from migrant farm workers and poultry workers, highlighted the difficulty of the labor, the often dangerous working conditions, and the low pay (often piece rate, not hourly). Check out the great curriculum from Teaching Tolerance

Students made presentations about the working conditions typical to their particular type of food. Some groups reported that farmworkers in their case study made less than the federal minimum wage, often earning just 1% to 3% of what we pay for those products in the store. Other groups highlighted the prevalence of sexual harassment and assault of women perpetrated by management in their case studies.

To get a deeper look at the plight of migrant farm workers, we watched a clip of the 2012 documentary Harvest of Dignity. Students were shocked to see the unsanitary, inhumane conditions at migrant worker labor camps on farms. One student said, “The workers are getting taken advantage of and being promised a nice place to live, but when they get there it’s horrible. And they can’t do anything about it.”

Students were surprised to learn that some of the issues farm workers struggle with – such as below minimum wage pay, no overtime pay, and child labor – are perfectly legal under current labor laws. The 1938 Fair Labor Standards Act created many of the basic rights and protections (almost) all workers in the US are entitled to today, but the act excluded two industries: farm work and domestic work. After realizing these were the two types of work that enslaved Africans used to do, students speculated on whether the legacy of slavery is why farm workers (and domestic workers) don’t have the same rights as other workers today. One student asserted that what is happening now to migrant farm workers is not so far from the days of slavery—and everyone else in the room agreed.

We concluded by coming up with a list of basic human rights that all farm workers should be guaranteed. Students’ ideas included: a $15 an hour minimum wage, safety training (especially regarding the use of pesticides), abolishing pesticides all together, child labor laws being applied to farm work, cleaner and more comfortable housing, ample time for breaks and days off, and comprehensive immigration reform that would allow migrant workers to be less vulnerable to exploitation.

When I asked students what they could do to help make some of these changes, their ideas included: educating farm workers about their rights, raising money to create an organization (or for an already existing organization) to fight for farm worker rights, boycotting certain products or businesses when appropriate, and growing their own food rather than supporting big agriculture companies. 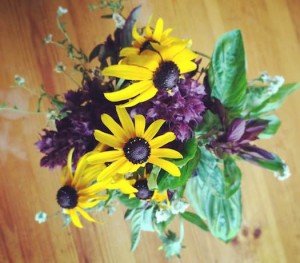 This last suggestion, of course, is something all of these students are already learning to do in their summer program at the Youth Farm, which left me feeling particularly inspired and hopeful. And I left not just inspired, but with a thank you present of a bouquet of flowers, basil, collard greens, and pears that they grew themselves right there in Brooklyn.

For more information about the Youth Farm, visit their website. Stop by their weekly farmers market on Wednesdays from 2:30 to 6:30at 600 Kingston Avenue in Brooklyn, which include cooking demos led by youth from 2:30 to 3:30.