Skip to content
Home » The Strange Saga of the Shoes: Climate Camp 2016

The first and last photo of this Climate Chronicles entry are literally the first and last photo I took during the Climate Camp week, July 25-29. It is a strange mystery, these two shoes, the kind of thing that makes you smile and think, well, think that anything is possible, just in case you, like me, sometimes get the feeling that our problems are too complicated to solve. It’s good to be reminded there is magic afoot, so to speak.

But before I dig in on this year’s weeklong camp, I have to shout out to the people who make it possible from a financial standpoint. My work at Earth Charter Indiana is largely about our youth program, Youth Power Indiana, and I couldn’t do this work without the assistance of the following: The Netherleigh Foundation, The McKinney Family Foundation and our newest funder, The Herbert Simon Family Foundation. All three help ECI by giving funds to help our youth program grow, a growth exemplified by our Climate Camps.

Add to this list Lilly Endowment Inc. whose support is specifically for our camps, as part of the Summer Youth Program Fund.

A thousand thank-yous. I happen to think this is the most important work I can think of, getting kids in leadership positions to deal with climate change and all the concomitant issues that connect to it: poverty, racism, and a beleaguered civic engagement spirit.

Our main partners on this annual weeklong camp include the Peace Learning Center, where two of our days were spent this year. The other partner is HEART (Humane Education Advocates Reaching Teachers), whose philosophy and pedagogy infuse our Climate Camp curriculum. PLC and HEART intersect at one essential person for our camps, Kristina Hulvershorn, Youth Program Director at the PLC, and also involved with HEART. Kristina is really the heart of Climate Camp, and she is also the brain, since she has loads more experience than me on how to corral lots of kids into a productive and meaningful camp experience.

Thanks to everyone who made — and makes — this camp possible, a camp that began in the summer of 2014 and continues with day camps and weeklong camps. Big hugs to Megan Hart, who volunteered every single day of the camp, and to Brian Plankis, our science advisor, who spent many hours with us. If you are interested in getting involved, contact me via this blog or my email.

Our first day was set at the Peace Learning Center at Eagle Creek. And boy did we pack it in, with numerous presentations and other activities that we hoped would set the stage for the rest of the week.

During Climate Camp, we carpool as much as possible, to keep the carbon footprint down while increasing camaraderie. I myself often had 3 or 4 campers in my car. The very first action on the morning of day one was to pick up my first camper, a counselor named Noah. I went to the house where he was staying (he lives in Lafayette), and was greeted by the image, below.

Noah soon emerged from the house, in his socks, to tell me he’d lost his other shoe, speculating that perhaps one of the dogs had carried it away somewhere. He returned to the house and came back with a different pair of shoes.

I took this above photo because … well, because it was the very first symbol of this week’s Climate Camp. I didn’t know what it meant, nor did I know what it might mean. I just felt the compulsion to secure the image.

The first order of the day — after the shoe mystery was begun, and the ice breaker was staged — was to divide our three dozen campers into smaller groups; in other words, to form Tribes. I’ll let Kristina explain: “”one of the key ways that we make climate camp work is to create a real sense of community through youth-led tribes. The students arrange themselves according to strengths and interests in small groups called tribes. Students name their tribes and look out for one another helping to fast-track inclusion and community building. It doesn’t hurt that it’s a super fast way to take attendance, or in our case, make sure we haven’t lost any campers!”

To explain more about our food philosophy at Climate Camp, once again, I’ll bring Kristina into the conversation: “A core component of climate camp is for students to practice sustainable choices in every facet of daily life. This ‘be the change’ philosophy can be seen when campers wash dishes instead of using disposables, print shirts on previously used shirts, bring until their own water bottles, and eat local, vegan and organic food.

“Our food, prepared by a veteran camper (Sam Piper, see below), did not have to travel as far to make it to our mouths so less CO2 to was used for transport, plus the lack of pesticides created a more hospitable environment for pollinators, the ecosystem as a whole, and the farmers who grew it.”

Kristina adds, “Lastly, the food we ate was vegan because plant-based foods create far less of an environmental impact in terms of land-use, CO2 and methane output, water use, water pollution, among other benefits to animals, global hunger, and health!”

This year we decided to do a Walking Tour of downtown Indy, emphasizing sustainability and adventure. It was an ambitious day and frankly, it was a relief after the presentation-heavy Monday. We started off at a favorite destination, The Nature Conservancy, but instead of the regular, inspiring tour of this green building, we wanted to learn about the TNC’s new project, the Children of Indiana Nature Park.

This new park, located on 31 acres in Centerville, Indiana (near Richmond), literally deeds a small portion of land to Indiana’s children. We were surprised after the presentation with actual deeds with GPS coordinates, so campers can visit their plot of land any time they want — either on line or in person.

Next stop on our walking tour, IndyGo’s new transit center.

A centerpiece of our day — and our entire week — was the work we’re doing in Indianapolis to promote climate recovery. The basic idea is youth work to understand not just the science of climate change and how we can solve it, but also civic action needed to push change through. (See my blog on Shortridge High School.) Note that this is happening elsewhere in the country, thanks to iMatter and Our Children’s Trust. Youth are advocating for Climate Recovery resolutions and ordinances in numerous states in this country, which is a pretty cool way to get adults to get out of their day-to-day bottom line thinking to focus on making longer-term decisions that ensure these kids will even have a future to grow up into.

So our plan was to take our camp to the public chamber of the City County Council, so campers could get comfortable with the process of advocating for change.

The City County Council public room was secured by a couple of City Councilors, Jared Evans and Zach Adamson, who are helping our campers prepare for this work. We were fortunate that Judge David Dreyer stopped by to add his voice — and ears — to our afternoon.

In other cities, including our partner city, Carmel and their Promise Project, youth place color photographs of the City Councilors on the chairs so that kids have something to look at besides an empty chair. It gives them a sense of reality, having an image there.

In our case we are lucky to have a veteran camper named Lucy, 13 years old, who is a prolific, and highly talented, portrait painter. She agreed to do portraits of each of our 25 City County Councilors.

We love riding bikes because it reduces carbon footprint while increasing self-reliance and physical health. So day 3 was about partnering with one of our favorite partners: Freewheelin’ Community Bikes. They are basically in the same business we are: building and empowering youth leaders. They’ve been doing a long time, thus we always are learning from them.

In past years we foolishly had everyone on a bike ride in one group. Too chaotic. This year, we decided to divide up the 4 dozen bikers and adult volunteers into four groups, so we would have less chance to run into each other on the trails. It wasn’t perfect, but it was an improvement.

Our fourth day of camp was designed to be a day-long work session, preparing for our showcase the next day. But we all felt we hadn’t paid enough attention to the issue of environment racism. Led by Butler University Senior Tabitha Barbour, an assistant director at Climate Camp, we met at the PLC for an hour, discussing the intersection of poverty, racism, and the climate crisis.

One of the campers, 11 year old Ocean, compared aspects of environmental racism to “segregation and discrimination, because some people think they are superior to the earth to different people on it, but really we are all equal.” Another camper, Aidan, said, “all the injustices are connected.”

Day 4, though, was also about getting media attention, which has not been easy. Quite often I am the media attention, in the form of this blog which has limited reach. We were lucky this week, because the Indianapolis Star came out to the PLC Monday to visit us and the result was this great story.

We were also treated to a visit to WFYI to livestream an interview which you can find here.

The culmination of our Climate Camps always involves a showcase of presentations. Yeah, I know what you are thinking; cute, sweet, maybe a little unbearable. Remember, though, these kids are trying to save their own futures, so while it may seem like kid stuff on the surface, but really it’s dead serious. While… being pretty cute most of the time.

We were so fortunate to get the a-okay from the Indiana State Museum to use their space for both prep and performance. ISM and ECI are already involved in the annual Eco Science Fair. This takes our relationship to the next level as far as I’m concerned. Thanks to Joanna Hahn, my Eco Science Fair partner, and all the fine people at ISM. You are truly in service to our youth.

So now we come to the magic moment, and I hope you enjoyed your journey along the way to get here, because honestly, as I post and review these photos I’m boggled by the experiences and fun we had. Who needs the Strange Saga of the Shoes to reveal this to be the juggernaut of fun it turned out to be? Well, you do. So here it is. Remember that first photo? Noah’s shoe on the porch, the one I knew somehow would be meaningful? At the very end of the showcase — when we were cleaning up — one of my campers came up to me with the shoe, below, in hand, telling me that Noah had left it behind on his way to California. 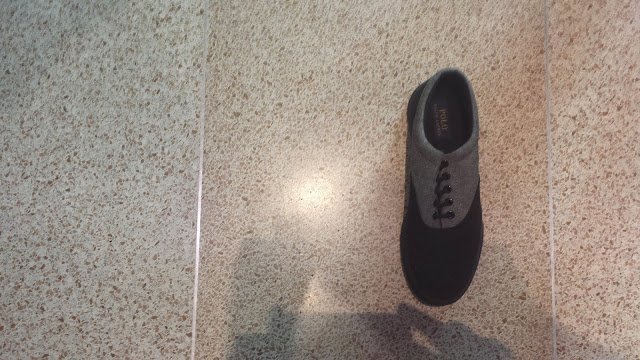 The first shoe was a right-footed shoe; this one, a left-footed shoe. Earlier that day, Noah had left to visit his grandparents in California, so we can only imagine this poor kid is shy on shoes, or, perhaps, has a mismatched pair.

This article was originally published on The Climate Chronicles and has been republished here with permission from the the author.