Involved Every Step of the Way: The Service-Learning Bake Sale Saga!

Getting a group of fifteen people to agree on anything can be a challenge. This was definitely the case for a group of elementary school children who felt very strongly about what cause they wanted to support during their recent service-learning project. But through discussion, patience, and a cool voting method, they were able to come up with a project about which everyone was happy and excited. Read on to hear about our success!

This past semester, I worked with a group of thirteen 3rd and 4th grade students at Chicago’s Academy for Global Citizenship in their H.E.A.R.T. after-school club. This particular program always consists of a service-learning project that the students complete over the course of about thirteen weeks. With a million different projects we could possibly work on, the first task was to brainstorm on two important things: problems in the world they wanted to help solve and in-class activities they could do to help with those problems. Choosing the project activity was fairly easy – the students suggested and were enthusiastic about putting on a bake sale to raise money for a cause. Picking a cause to donate the bake sale money to was a little more difficult…

The students came up with an impressive list of problems they knew about and wanted to help solve with their project. The problems included: bullying, racism, animal abuse, litter, car accidents, climate change, endangered species, poverty, oil spills, homeless animals, human homelessness, world hunger, and pollution. With such a large list, we needed to whittle it down to one topic on which to focus. To make sure the group settled on an issue they could all agree upon, I first had the students vote on their top three choices. Then, they picked the final topic using the extremely helpful and diplomatic “Fist to Five” voting method.

In the Fist to Five voting method, each person votes by raising one hand in either a fist or with one through five fingers raised. If someone raises five fingers, it means they are extremely enthusiastic about the topic and would want to be a leader on the project. Four fingers mean they are very excited about the project and would want to help out. Three fingers mean it’s not their favorite topic, but they would still like to be involved and cooperate. Two fingers mean they are not super excited about the topic. One finger means they do not like the topic at all. And a fist (meaning “zero”) means they refuse to work on that project. The catch is, any student who votes with two fingers or lower has to defend their reason for voting in such a way. 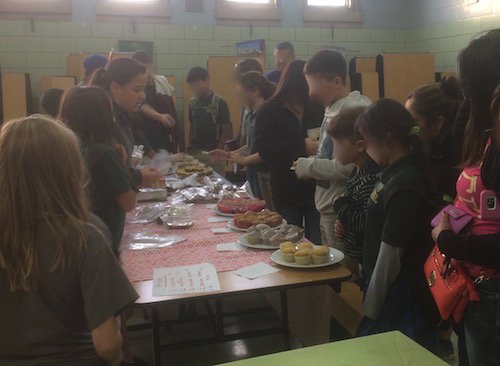 Using the Fist to Five voting method, our group was able to break down the topic choices to two final contenders: helping homeless animals by donating the bake sale money to PAWS Chicago or helping people struggling with hunger through a donation to the Greater Chicago Food Depository. We had strong proponents on each side and a lively discussion about why either topic should be picked. When we arrived at a stalemate, with students on both sides making strong arguments for their topics, it would have been easy for me, the instructor, to simply make the final choice in order to to speed things along, but I knew I had to find a better way. Instead of picking one side or the other, I needed to help the students reach a compromise. I suggested that perhaps their final project focus on helping both causes. The students voted on this option using Fist to Five, with most of them voting four or greater and only one student voting with two fingers. With a little more discussion about the benefits of donating the bake sale money to both causes, the group cast their votes again, and this time, all students voted with three fingers or more. Success! Even though it took some time, we peacefully and successfully decided on a cause and a project that all students were happy to work on.

Over the next few weeks the students worked on various projects to help plan for and execute the bake sale. They learned how to compose a professional letter and used that skill to write to their principal, asking for permission to have the bake sale (the principal replied with a resounding yes!). They researched yummy baked good recipes that followed the school’s food policy (sugar-free, peanut-free, and preferably with organic and non-GMO ingredients!). They created smaller promotional posters to place around their school and larger advertisements to direct people to the bake sale the day-of. They wrote an email and a Facebook post to send out to their families and Academy for Global Citizenship staff members, requesting donated baked goods for the sale. They also researched more about PAWS Chicago and the Greater Chicago Food Depository to learn exactly how those organizations help pets and people, respectively.

It was a busy few weeks, but finally, the exciting day arrived! The bake sale was scheduled to take place in the cafeteria near the entrance of the school during end of day pick-up. We had homemade baked goods, donated from about a dozen individuals, beautifully laid out, ready to be sold. The students were incredibly excited to finally participate in the project they had been planning for so many weeks, and each one was assigned a job: passing out items to customers, advertising the bake sale to people entering the school, helping with set-up and clean-up, taking orders and listing prices, asking for further donations, or keeping track of items sold and money raised.

The bake sale was a resounding success. At one point, we had nearly twenty-five kids and adults in the cafeteria, ready to buy some baked goods. Once the customer flow halted, the tables were cleaned up, and the few remaining cookies had been shared among my hard-working students, they couldn’t wait to sit down and count up how much money they had raised for PAWS Chicago and the Greater Chicago Food Depository. In total, we raised nearly $74 to be split between the two groups!

We had a lot of customers and raised a hefty sum of money, yet I think the most successful part of the bake sale was the fact that a group of thirteen 3rd and 4th graders – with different interests, skill sets, passions, and goals – were able to come together and work on a project they were all excited about. The bake sale was a one-hour whirlwind during which the students were all so engaged, focused, and having fun! I’m confident that actively involving the students in decision-making and step-by-step planning processes as well as giving them responsibilities during the bake sale was key to their engagement and pride in this service-learning project!