The “Prevention of Cruelty to Farm Animals Act” is a ballot initiative that will be part of California’s November election. If this act becomes a law, it will change the way cows, pigs, and chickens are confined on farms in California and will require pork, eggs, and veal that are sold in the state to meet these requirements as well.

The beauty of humane education is that it connects students to meaningful, real-world issues. One area that I’ve always found to be particularly engaging are animal issues. That is why this year, my colleague, Liz Walch, and I decided to have 3rd-6th grade students in our summer program in Chicago investigate this act and learn about the treatment of animals on farms.

We began the unit by teaching about animals’ social and emotional lives. Liz had experience volunteering at a farm sanctuary and shared her knowledge with the students. She used photos of farm animals demonstrating different emotions and explained their body language. Then the students created playdough sculptures of farm animals displaying an emotion of their choosing. 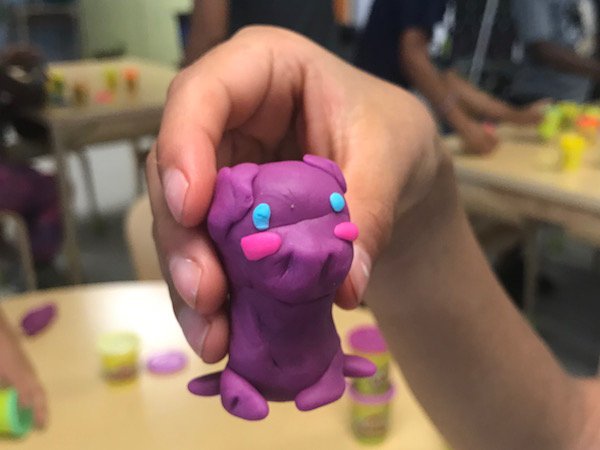 In the following lesson, Liz taught students about “The Five Freedoms,”which are internationally accepted standards regarding animal welfare. The students learned what The Five Freedoms are (i.e. freedom from thirst and hunger; freedom from discomfort; freedom from pain, injury, and disease; freedom to express normal behavior; and freedom from fear and distress). Students then looked at examples of animals’ living conditions and had to decide whether the freedoms were being met. Afterwards, the students completed a worksheet where they drew pictures of what farm animals need to be happy and health. 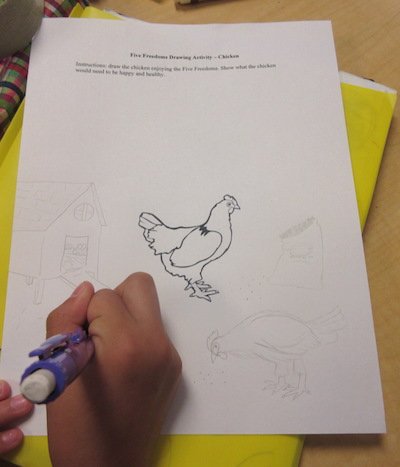 I taught the next lesson about factory farming and the Prevention of Cruelty to Farm Animals Act. This  lesson followed the “Behind Closed Doors” lesson from HEART’s Humane Education Resource Guide, which can be downloaded for free here.  At the conclusion of the lesson, I had students read a news article about the Prevention of Cruelty to Farm Animals Act. Then I had the students complete the “What Do You Think About the Bill?” graphic organizer, which required them to write reasons why people in the article supported the bill and why people were against the bill. 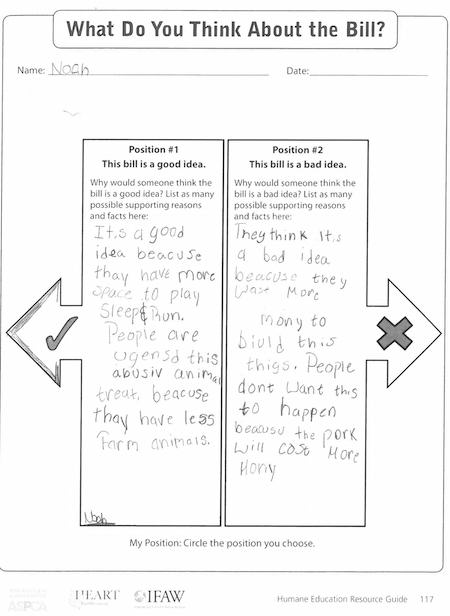 For the culminating lesson, I modified the “Letter Writing” lesson that is also in HEART’s Humane Education Resource Guide. However, instead of the students writing letters to politicians, I had them write an “open letter” to the people of California. I made this change because the Prevention of Cruelty to Farm Animals Act is a ballot that will be voted on by the people of California and not a bill that will be voted on by legislators. The students’ letters can be read here. 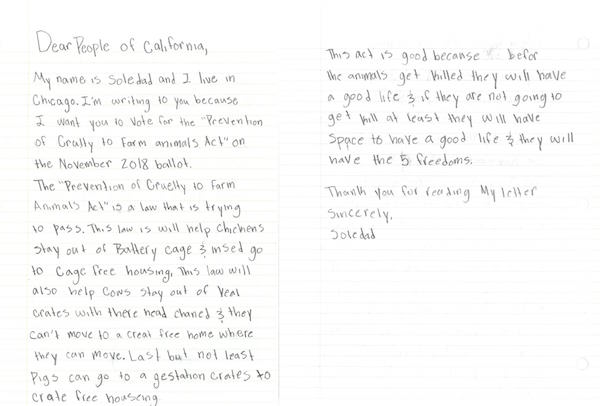 Throughout the experience, I was surprised by how much students enjoyed this topic. I was worried that farm animals wouldn’t be as interesting as companion animals or other topics, but I was wrong. The students had engaging conversations and wanted to know more about this issue.

However, this mini-unit was far from perfect. Many students were angry that people would put animals in battery cages, gestation crates, and veal crates  and said that the farmers were “evil,” that they wanted to “destroy the farms.” I did my best to help them understand that it was a systemic problem and that there are farmers who want to change the way animals are raised. Also, people can have different opinions, that does not make them “evil,” but I don’t know how well they understood these concepts, especially because some of them were so upset. I think it was especially challenging because the students all lived in an urban area and did not have much knowledge about rural or farm communities.

Also, students often misunderstood what the “Prevention of Cruelty to Farms Act” would do. Many students thought that the act would make the farm animals’ lives “perfect.” I found that it was helpful to have photos of “cage-free” or “crate-free” farms, so that students could see that these living conditions did not guarantee that The Five Freedoms were being met. For example, pigs on crate-free farms are still kept indoors and are not allowed to express natural behaviors like wallowing in mud or digging in dirt.

Even though there are things I would do differently, it was incredibly heartwarming to see students get excited to learn about farm animals and passionately express concern for their well-being.