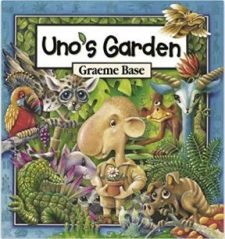 When Uno arrives in the forest one beautiful day, there are many fascinating and extraordinary animals there to greet him. And one entirely unexceptional Snortlepig. Uno loves the forest so much, he decides to live there. But, in time, a little village grows up around his house. Then a town, then a city, and soon Uno realizes that the animals and plants have begun to disappear. 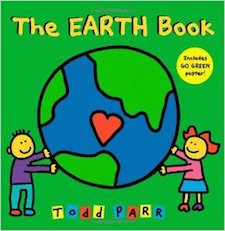 With his signature blend of playfulness and sensitivity, Todd Parr explores the important, timely subject of environmental protection and conservation in this eco-friendly picture book. Featuring a circular die-cut Earth on the cover, and printed entirely with recycled materials and nontoxic soy inks, this book includes lots of easy, smart ideas on how we can all work together to make the Earth feel good – from planting a tree and using both sides of the paper, to saving energy and reusing old things in new ways.

Be the Change: A Grandfather Gandhi Story 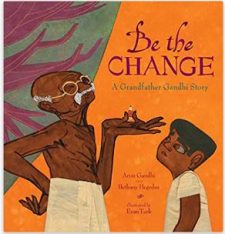 At Grandfather Gandhi’s service village, each day is filled, from sunrise to sunset, with work that is done for the good of all. The villagers vow to live simply and non-violently. Arun Gandhi tries very hard to follow these vows, but he struggles with one of the most important rules: not to waste. A poignant, personal story of each action we take can have far-reaching affects and learning to live a life of non-violence. 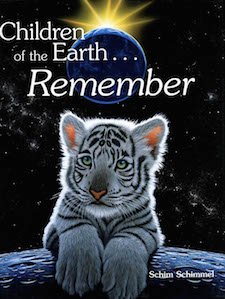 Children of the Earth … Remember

Children of the Earth Remember is a tender lesson of sharing and protecting the Earth, enhanced with stunning artwork.

Fishing in the Sky 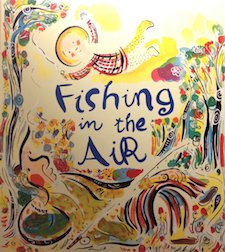 A young boy and his father go “fishing” in the air, catching the breeze and the clear sky, bonding by being together and enjoying the beautiful land around them.

The Chimpanzees I Love: Saving Their World And Ours 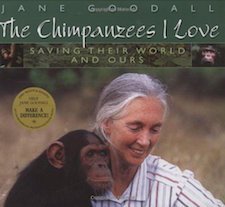 As a child, Jane Goodall dreamed of living with the wild animals of Africa. As a young woman, she amazed the world with her groundbreaking discoveries about chimpanzees, which she documented in her acclaimed National Geographic television specials. Ever since, Dr. Goodall has campaigned unceasingly for the protection of the chimpanzee ­ now an endangered species. This moving, personal account will inspire readers of all ages to join in her vital work.

Dear Children of the Earth 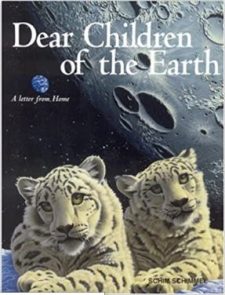 A remarkable letter from Mother Earth asks for help from children everywhere. Mother Earth writes to express her love for each and every child and asks for their love and appreciation in return. In her own words, and with all of her heart, Mother Earth tells young people that she entrusts them with her protection.

One Plastic Bag: Isatou Ceesay and the Recycling Women of the Gambia 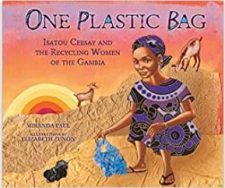 Plastic bags are cheap and easy to use, but they harm the environment and they are a danger to animals. In Njau, Gambia, Issatou was concerned about the number of plastic bags littering her community. She found a way to recycle the bags and support women. 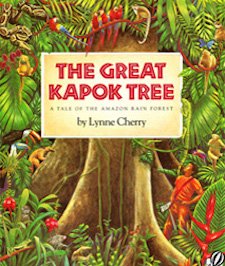 One day, a man exhausts himself trying to chop down a giant kapok tree. While he sleeps, the forest’s residents, including a child from the Yanomamo tribe, whisper in his ear about the importance of trees and how “all living things depend on one another” . . . and it works. Cherry’s lovingly rendered colored pencil and watercolor drawings of all the “wondrous and rare animals” evoke the lush rain forests, as well as stunning world maps bordered by tree porcupines, emerald tree boas, and dozens more fascinating creatures. 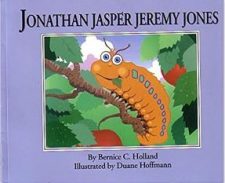 Follow the adventures of Jonathan Jasper Jeremy Jones, starting from when he first emerges as a caterpillar until he becomes a butterfly. Jonathan explores the world around him and narrowly escapes many dangers, including predators and people spraying pesticides on the tree where he began his journey. Thankfully, he finds safety and meets a friend at the end so that he no longer has to figure out how to survive on his own.

The Adventures of Earth Saver Girl 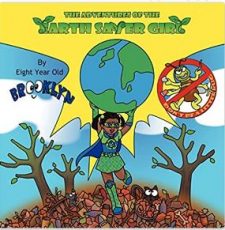 Layla was an ordinary girl who shared her father’s passion to help protect the Earth by recycling, reducing, and not littering. When Layla finds out she has super powers, her first mission is to help rid the Earth of litter. She finds out that her cousin is one of the neighborhood’s biggest litterbugs, and she sets out to teach him a lesson.

Lost In The Woods: A Photographic Fantasy 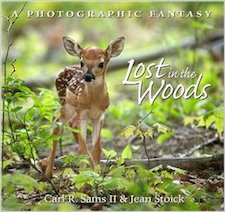 A beautiful springtime fantasy from the creators of the best-selling Stranger in the Woods. This New York Times bestseller is a quiet story about trust and patience. Nature lovers of all ages will appreciate the amazing photography and gentle words which weave a tale about a young fawn waiting for her mother’s return. From a red-winged blackbird to a hissing goose, woodland creatures keep watch over a young fawn they believe is lost in the woods. But the book also delivers a message: most fawns found alone in the woods are not lost or abandoned. In fact, newborn fawns spend their first weeks without mom because her scent will attract predators to her young.

Why Should I Protect Nature? 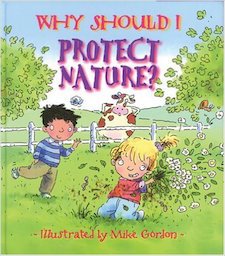 When children take a trip to the countryside, some of them are rowdy and careless, breaking tree branches and scattering trash. But if everyone acted that way, there would soon be no trees, no birds, and the fields would be ugly and unsafe for both animals and people. Part of every child’s development involves asking questions. Today, some of the most important questions kids ask are related to the natural environment.

Why Should I Recycle? 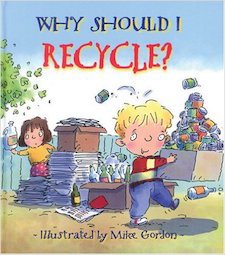 What if everybody threw away old bottles and newspapers, littering the world with glass and plastic and tin cans that should be recycled and made into new products? Mr. Jones is a teacher who sets a good example for kids by separating his trash for recycling. When he takes them on a class trip to a recycling plant they learn the value of recycling. Part of every child’s development involves asking questions. Today, some of the most important questions kids ask are related to the natural environment. 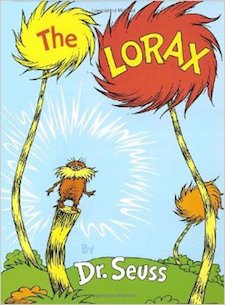 Long before saving the earth became a global concern, Dr. Seuss, speaking through his character the Lorax, warned against mindless progress and the danger it posed to the earth’s natural beauty. 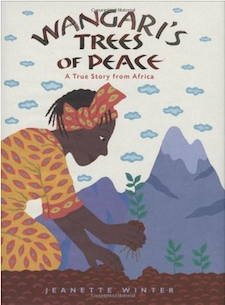 As a young girl growing up in Kenya, Wangari was surrounded by trees. But years later when she returns home, she is shocked to see whole forests being cut down, and she knows that soon all the trees will be destroyed. So Wangari decides to do something—and starts by planting nine seedlings in her own backyard. And as they grow, so do her plans. . . . This true story of Wangari Maathai, environmentalist and winner of the Nobel Peace Prize, is a shining example of how one woman’s passion, vision, and determination inspired great change.Includes an author’s note.

One Child, One Planet: Inspiration for the Young Conservationist 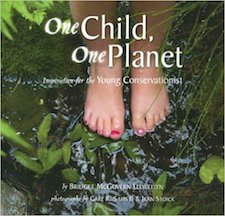 A Loving tribute to mother earth, this book explains how everyone’s actions make a difference. Loose-rhyming text and awe-inspiring photography are woven into a beautiful message promoting excitement and responsibility toward the planet.

Beginning with: A lifetime for a mayfly is about one day, 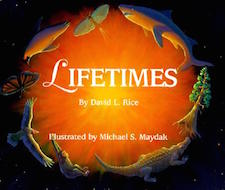 it presents 24 lifetimes such as that of an earthworm (about six years), a giant sequoia (about 2,000 years), a bacteria (well, that depends), a dinosaur (never again) and the universe (about 15 to 20 billion years). Each example comes with detailed illustrations and something to ponder, such as, for earthworms: Worms teach us that our work can be very important, even if it cannot be seen. Each plant or animal is practically a lesson plan in itself, with tell about it, think about it, and look it up challenges.